Now I’m getting a little silly with Google maps and their wild way of getting you an image of a particular building. Snapshots from my past appear with a few key strokes (plus my solid memory of addresses!).

The building in the photo above is the first house I ever lived in. It’s on West 11th Street in the Bensonhurst neighborhood of Brooklyn. Those two windows on the first floor were my bedroom. It was a railroad apartment…each room right next to the other in a long line. My bedroom, led into my parents’ bedroom, led into the living room/dining room, led into the kitchen and then continued down a long hallway to the bathroom.

My Aunt Mary and Uncle John lived upstairs. They weren’t really my aunt and uncle but that’s how I knew them.  They were friends of my parents — I assume they met because they lived upstairs. But my Aunt Mary became a mentor to my mom (who was a new bride, a new mom) and showed her recipes, gave her tips, and was, in general, there for her.

Mary and John were Sicilian. So the recipes followed suit, but they were also somehow influenced by this New World, this New York, this Brooklyn. Every recipe of Aunt Mary’s is wonderful. And each has lived within my family for years and years and are still reliable favorites.

Here’s her spin on spare ribs or baby back ribs. We made these recently in a cooking class with a menu of  Aunt Mary recipes!

1 rack of baby back ribs or spare ribs, cut into 2-3 bone pieces

Season ribs with salt  & pepper. Heat the olive oil in a large sauté pan. Brown ribs until golden on each side. Mix a couple of cups of water with half the vinegar. Pour over ribs and add bay leaves and some hot pepper. Let simmer partially covered for 20 minutes.

Meanwhile mix together the remaining brown sugar and vinegar with the garlic and mustard (add a bit more of any of these ingredients if you lean that way). Season with salt & pepper. Lift out ribs from the cooking liquid and transfer to a foil-lined sheet pan. Coat ribs with the sauce. Cover loosely with foil and bake in oven for 20-30 minutes until tender. Cut ribs into single pieces, pour any remaining sauce over them and serve. 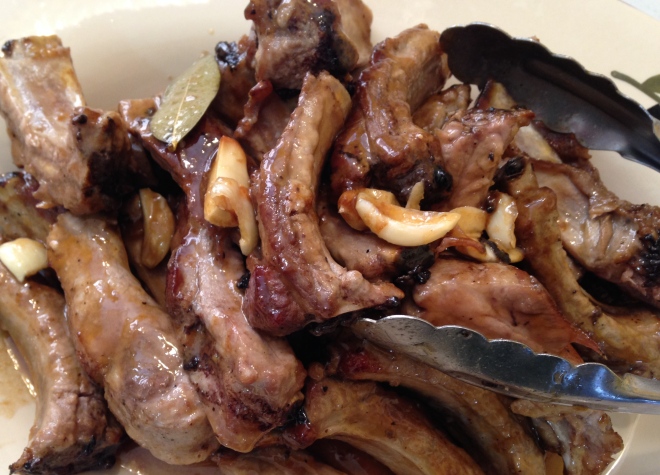