sausage and peppers. you know you love it.

It’s the quintessential Italian-American classic. Grilled, broiled, or pan-fried Italian sausages, with sautéed peppers and onions. The flavor (and the aroma) are exactly what it means to be Italian-American. It’s the “national” dish of the immigrants from Italy (especially Southern Italy) who made their home here in the “New” World. 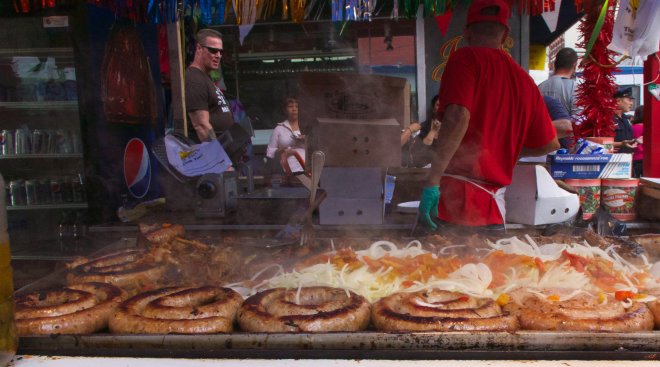 I think I must have been a teenager when I first pushed through those crowds. A group of us with a bottle of red wine in a brown paper bag in tow. Of course, I’ve been back many times throughout my NYC life, but in my later years it was actually a festival to avoid. Crowded. Touristy. The same ole, same ole.

But that doesn’t stop memories from glowing. And the sense-memory of downtown NYC air permeated with sizzling sausage, peppers and onions on a flattop–the ghost-taste of San Gennaro–gets me right into the kitchen to make some at home. An irresistible “gotta-have-it” urge.

When the urge strikes, I want this dish to cook fast. Here’s the fastest way I know how.

Slice 2-3 sweet peppers– red, green, orange, yellow, what you prefer. I think green has always been the standard, but I’m a fan of the other colors (green peppers have a lot more punch). And slice 2 medium onions. We’re looking for thin wedge-like slices.

Saute in a large saute pan with a little olive oil until softened. About 10-15 minutes. You don’t want it to cook forever because the peppers and onions will really start melting and attempt to disappear. Season with salt & pepper.

Meanwhile, get the oven to about 400 degrees. Poke 4-5 sausages in a few spots with a paring knife. Place them on a foil-lined sheet pan and roast until browned well on each side. 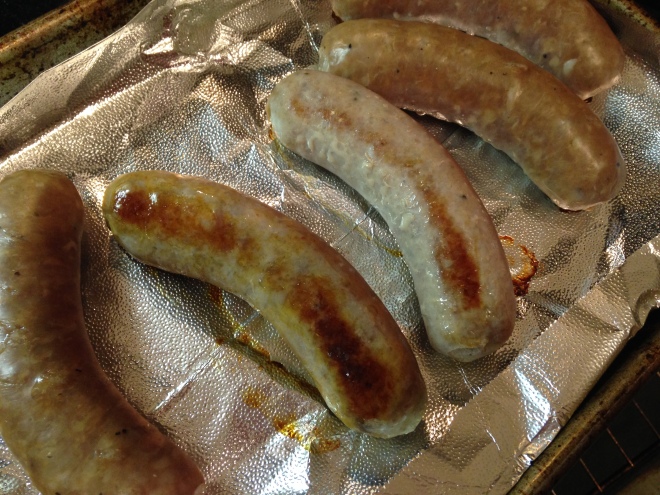 When they are cooked through, cut them in half with a diagonal cut. Add them to the already softened peppers and onions… 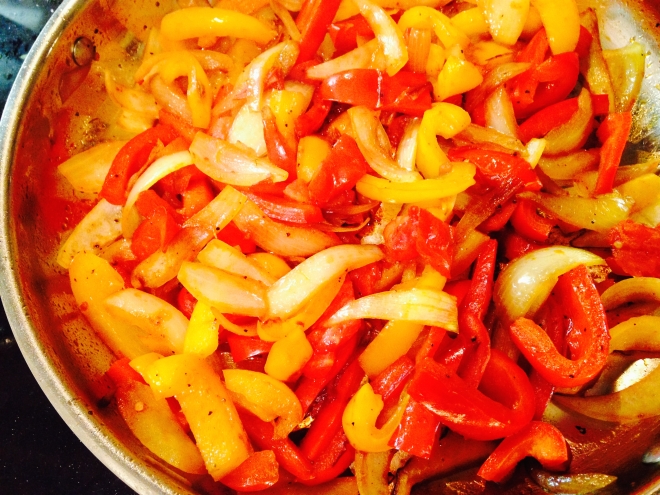 Let the sausages hang out in there for about 5 minutes or so (as you sauté on medium heat) until everyone gets acquainted and the flavors decide to get married. Then you’re ready to indulge. Of course, on Mulberry Street they will pile this concoction on a big Italian hero roll. I take the trying-to-avoid-bread-so-I-can-still-fit-into-my-jeans route. And just eat this wonder on a dish. Up to you! 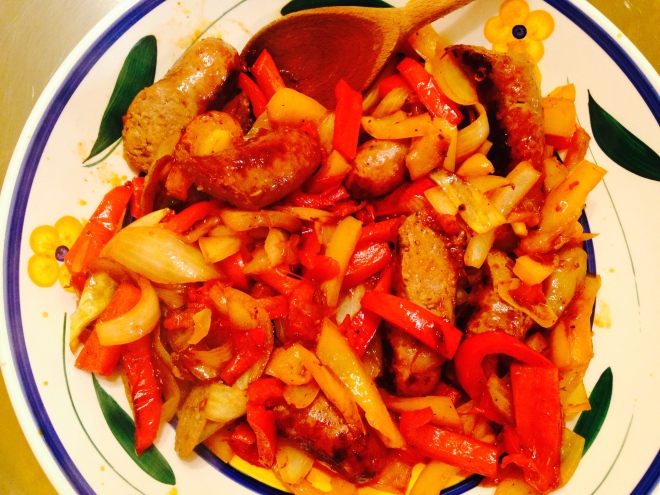 sausage and peppers without the roll

4 thoughts on “(The Inevitable) Sausage and Peppers”