One of my most favorite things about the Christmas season is Christmas Eve dinner. It’s the best meal of the whole year. And that’s because of the Italian inspiration called: the Night of the Seven Fishes.

Believe me, every year I try to get SEVEN fishes on the menu. But I usually end up with about 5. This year, we felt relaxed and casual and only had 3. But what a THREE.

My mom, sister and I decided to go to Costco on Christmas Eve morning (Duane resisted the Costco Christmas merriment–read: crowds). We knew they would have their impressive holiday fish island, piled with ice, and piled with great seafood. We thought: whatever looks good, we’ll buy it, then figure out our menu.

We rushed our huge carts up the wide-wide aisle to the seafood oasis. (One year, we got there late and watched 2 of the last 3 bags of clams go…arrggh!) We reached the icy array and there was plenty of sea creatures still available. We grabbed a big bag of little neck clams from Cedar Key, FL. We got a big bag of mussels from FL, too. Then we couldn’t resist the freshest, most beautiful lobster tails we’d ever seen. Pale, marbled brown and grey, with specks of orange. These were from Honduras. We got 4 tails, about 1 lb. each. One for each of us.

I’ve always found Costco’s fish & seafood quality to be pretty top-notch. Each of our seafood treasures had the fresh scent of the salty sea. We took it all home, chatting in the car about how we’d cook it up.

We decided to really keep it simple with favorites we knew well and love more. 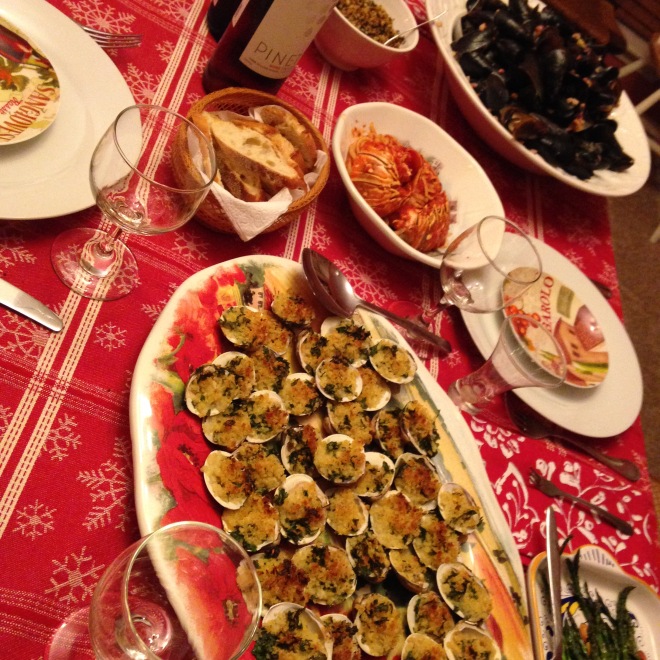 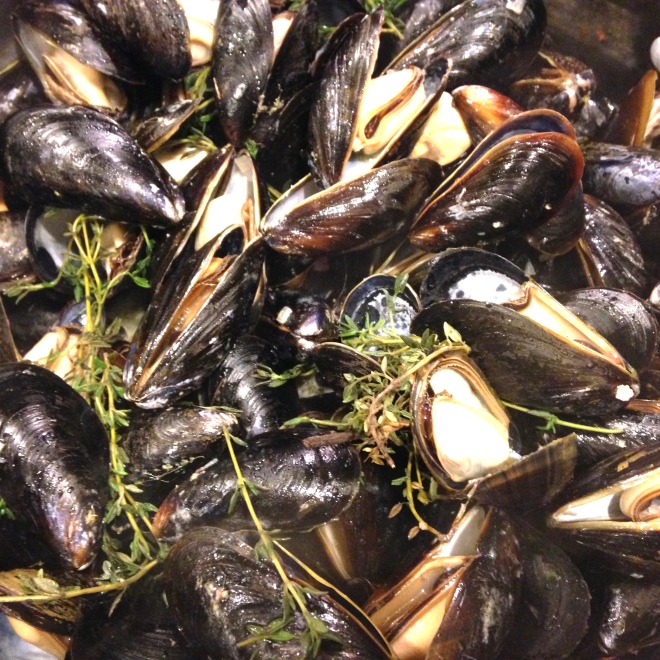 …And Lobster Fra Diavolo–the Holy Grail of Italian seafood dishes. I’ve only had it a handful of times in my entire life. I remember my family making it on Long Island one year. I remember something like it in Italy. I may have tried once or twice on my own many years ago but the memory is blurry, watery, like bobbing up and down along the surface of the green-blue Atlantic.

Of course, Maine lobster is the only lobster I knew growing up. In NY, our lobsters were from Maine. (Altho, my mom tells stories of family members fishing for lobster off the shores of Brooklyn where the Verrazano Bridge now stands.)

In my 30 years of NYC living there were quarterly treks to one of 3 Spanish restaurants in Manhattan that each served special lobster dinners. These started at $12.95 for a pound and a quarter lobster (steamed or broiled) with a salad and side (rice pilaf or sliced roasted potatoes).

I had a circle of girlfriends who drooled on cue when these quarterly adventures came up on our calendars. At the table, over our first glass of wine (or Sangria–it was a Spanish restaurant, remember), we argued for half an hour over steamed or broiled (even tho we had each already decided how we wanted our lobster cooked on the subway ride over). Then we argued, while eating, as to which parts of the lobster should be eaten first. I go for sucking on the legs, then the cracking the claws, then eating any other shreds of meat in the body along with the tomalley, and saving the tail for last (with melted butter). These were 3-hour-long sittings because the other thing on the menu was a large quantity of laughter. Eventually, the dinners would jump in price to $13.95, $15.95, $18.95, until someone moved away, or we started to lose touch, or we just stopped going. (Sad face.)

Friends of Duane–Donna and Mike Dion–who actually live in Maine (and grew up there) treated us to a lobster feast a couple of years ago. They had a huge pot outside for steaming them. (Mike also grilled a few steaks and some corn, & Donna steamed a whole side of salmon, and heated a huge pot bubbling with steamers.) THAT was the best lobster I ever EVER tasted. Just caught that day. Probably from down the road.

But back to Costco, Honduras, and Christmas Eve. Explosive special moments happen whenever/wherever/however lobster is served.

Fra diavolo means from the devil. Which means the dish is hot and spicy. We use crushed red pepper flakes, but feel free to go crazier with heat. If your eyes water while you bite into the tail that’s okay. We don’t get that hot here, but you’re welcome to do so. We’re afraid of losing any bit of that LOBSTER taste. So we go easy with the hot. It’s more like an elbow poked in your side, and less like an elbow poked in your eye.

Put a pasta pot of water on the stove to heat.

Using a good pair of kitchen shears, cut the inner shells of each lobster tail in half, lengthwise. Then cut the outer shells, and the meat, in half lengthwise. Now you have 8 cleanly cut halves of lobster tails (see photo below).

Heat the olive oil in a large saucepan till hot. Add the lobster tails. Cook on a lively heat, turning them occasionally, until the meat turns opaque white, about 5-6 minutes. Remove tails to a bowl, and set aside.

Add garlic, red pepper flakes, oregano and parsley to the pan. Cook on a lively heat, stirring, until the garlic begins to soften and turn color lightly, about 2-3 minutes. Add the wine. Let the wine sizzle while you scrape to unstick any bits that have stuck to the pan. When the wine has evaporated by half, add the tomatoes. Stir to combine. Season with salt and pepper. Simmer for 10 minutes.

When the pasta water has come to a boil, season generously with salt. Add the pasta, stir to keep strands from sticking until pasta water boils rapidly. Cook to al dente. Half way through cooking the pasta, add the lobster tails (and any accumulated juices) to the tomato sauce. Cover askew and let simmer 5 minutes.

Drain pasta. Add to a serving bowl. Add tomato sauce to coat. Serve each person 2 halves of lobster tail with a nice serving of pasta. Drizzle some extra sauce on top. 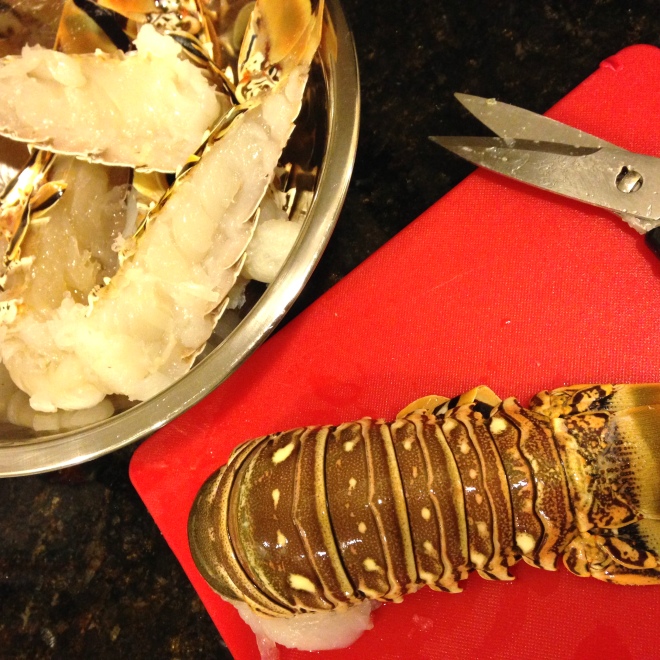 cutting tails in half 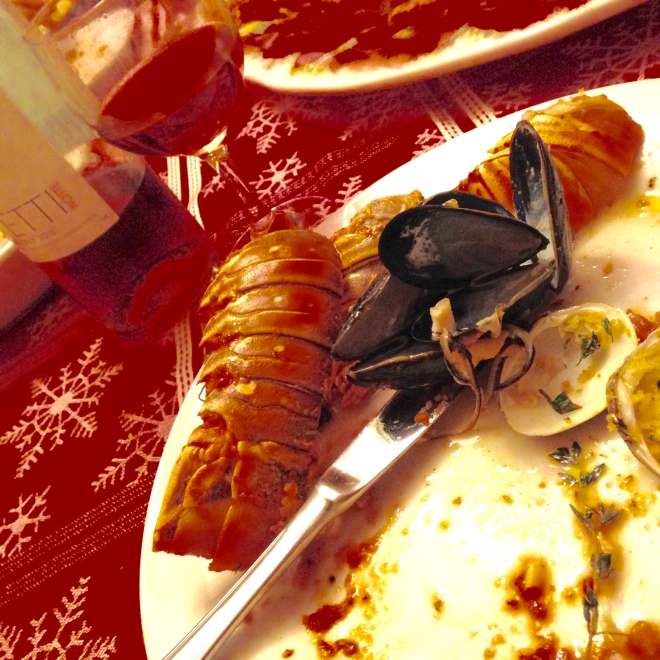